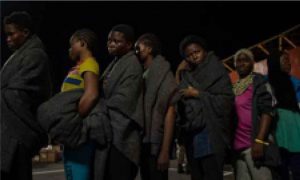 History has it that in ancient times, slavery was an integral part of society and was used to show affluence. Slaves were engaged as labourers in farms, fields and did house chores with little or no pay. However, with the spread of civilization and human rights activism, slavery was abolished and is a punishable offence by law. This notwithstanding, reports have it that slavery is still being practiced in certain parts of the world today. And advocates, survivors, policy makers, journalists and other relevant stakeholders are making efforts to seek an end to all forms of modern day slavery.

According to a report by the Global Slavery Index, there are about 45.5million people still trapped in modern day slavery today. This figure is huge and highlights the need for countries to take strong action against the practice. Due to weak laws and cultural influence, some countries see slavery as a norm despite the global call for the practice to be stopped. One of such countries is Mauritania, which according to the Borgen project, has the highest percentage of its population in slavery with approximately 4% of the total population enslaved. This amounts to roughly 140,000 to 160,000 people enslaved — Mauritania’s total population is only a mere 3.8 million. Globally, women and girls are most affected in modern day slavery and it is necessary to get them involved in current efforts to end the practice.

From a victim to survivor
Princess Inyang Okokon, a human trafficking survivor from Nigeria but currently based in Italy while narrating her story said she was deceived into sex work by traffickers with the promise of a better job abroad.

“I was a cook in Nigeria but the traffickers lied about offering me a better job in Europe. They promised to take care of me but when I arrived in London, they sold me into sex work. My madam was very harsh to me but luckily, I met a man who listened to my story and genuinely offered to help. He took pity on me and provided a better job for me. He took me out of sex work and today, we are happily married. I vowed to fight back human traffickers and prevent them from deceiving more girls from Nigeria and across Africa. Today, I am doing just that through my organization PIAM Onlus in Italy which identifies and assists other women like myself who were trafficked into sex work”, she said.

Insecurity and poverty promotes modern day slavery
With the rising insecurity and harsh economic realities in some developing countries of the world, this leads to a large migration of people to West with the hope of finding peace and employment. This opens a gap for human traffickers to lure unsuspecting migrants especially women and girls into modern day slavery. And when some of these women show resistance, they are physically abused in terms of rape, torture and poor treatment. This has compelled more women to begin to foster ideas of addressing modern day slavery and supporting victims to be reintegrated into society.

At the Trust Women Conference held in London (November 30 to December 1, 2016), Monique Villa, CEO of Thomson Reuters Foundation said that every year, the Trust Women conference serves as a platform to discuss pressing issues affecting women and the 2016 conference captures the need to stop all forms of gender based violence and modern slavery especially of girls and women. According to her, in recent times traffickers have moved from trafficking drugs to trafficking children, with prostitution, cyber sex, organ taking, child conscription into terrorist groups, radicalization and others forms of violence exposing children as young as 5 years to loss of life on the job.

She further disclosed that in some parts of the world, government laws prohibiting slavery are weak or not fully implemented to prosecute defaulters which make it difficult to completely tackle the issue. She however commended the efforts of activists and organizations working to address the issue.

Government should improve policies on tackling slavery
Speaking at the conference about his country’s efforts in ending modern day slavery, District Court Judge of Nepal, Tek Narayan Kunwar, said that current economic indices have placed Nepal as one of the poorest countries in Asia. And each year, thousands of Nepalese travel out of the country looking for work which makes them easy targets to be lured and enslaved into red zones of India and construction sites in Qatar as well as other parts of the world.

Gender Equality should be promoted
As one of the Sustainable Development Goals, Gender Equality is to be promoted at all levels to ensure that women are treated with respect and are able to contribute to policy formulation that affects them. If this is done, there will be a reduction in Gender Based Violence and hopefully tackle modern day slavery of women as there would be laws ensuring protection of women and stiff penalties for people involved in the trafficking of women and girls.

Previous Story
MALNUTRITION IN NIGERIA – ISSUS, IMPACT AND SOLUTIONS
Next Story
“PUT YOUR MONEY WHERE YOUR MOUTH IS”

“PUT YOUR MONEY WHERE YOUR MOUTH IS”

“Put Your Money Where Your Mouth Is” should be the...

“Malnutrition in Nigeria: Issues, Impact and Solutions “The image around...